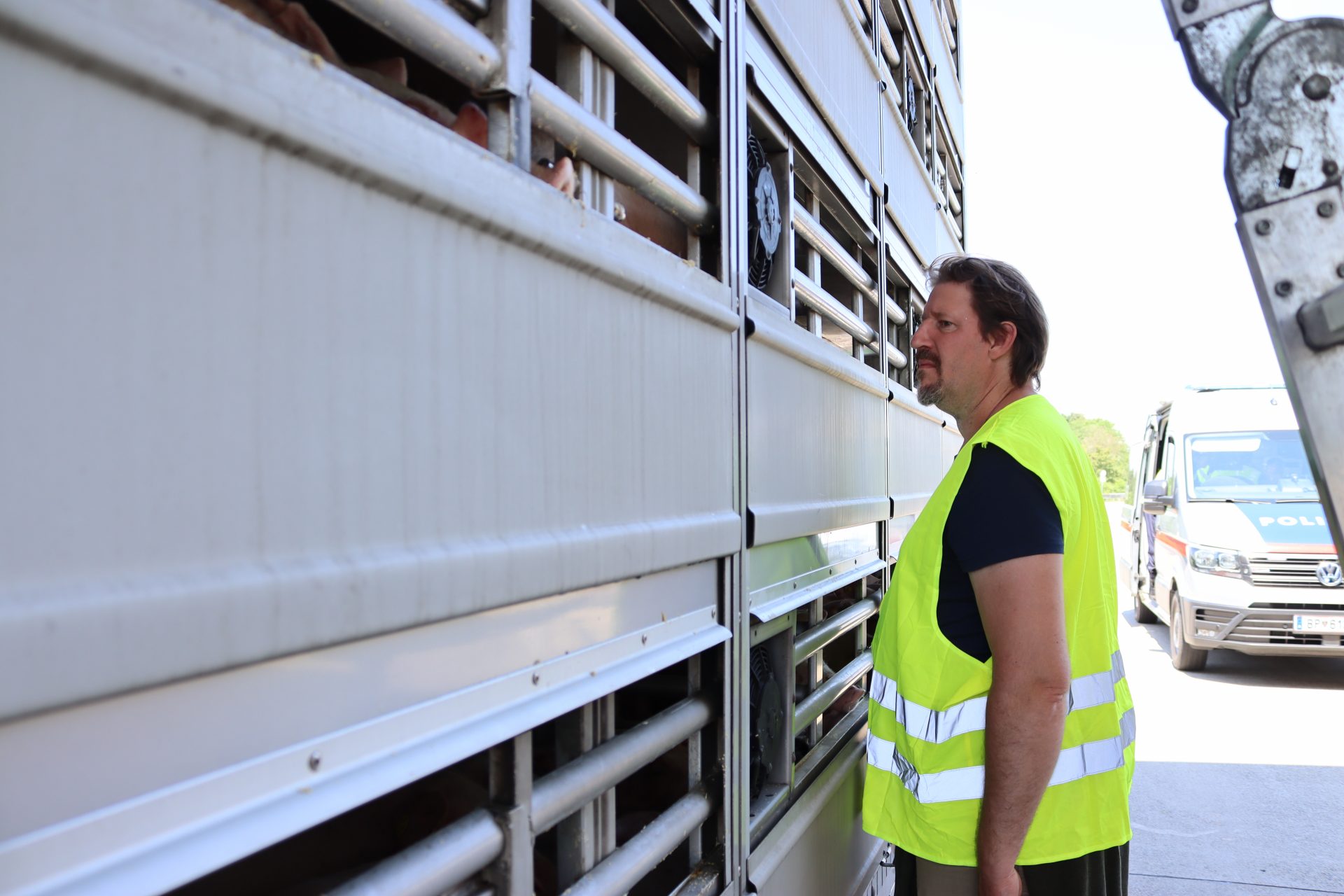 At temperatures of more than 27 degrees in the shade, I took up position on the Pyhrn highway at the Spielfeld border crossing, together with Austrian police units and Slovenian veterinarians. Within half a day the police stopped two animal transports containing live animals. The result was once again shocking.

Suffering in the vehicle

The first truck contained pigs from Denmark that were about two months old and on their way to Hungary. The truck’s cooling system and water troughs were switched off during the journey, so the animals were thirsty and completely overheated. We measured up to 35 degrees inside the transporter. According to the animal transport regulation, the temperature inside the vehicle must not exceed 30 degrees and pigs must have continuous access to water. The water system, which was switched on during the inspection, was already empty again after 10 minutes. The animals showed bite and scratch marks. The police issued several notices.

The control showed once again that violations of the law are all too common during the transport of live animals. Although some of the animals were so apathetic from heat and thirst that they did not move, this pig transport unfortunately was far from the worst thing I have seen on control actions so far.

Live animals for a global market

The second transporter had loaded young cattle from Germany. After a stopover in the Czech Republic, these animals were on their way to Koper, Slovenia, from where they were to be taken to Egypt by ship. The cattle therefore still had the worst part of their journey ahead of them. Live animal transports on ships are pure animal cruelty. There are no maximum transport times for ships, which is why animals can travel for several days, weeks or even months in extreme heat and without veterinary care for emergencies. The animals on this transport were healthy and well cared for. Nevertheless, there was one complaint: the driver did not take his legally required rest break of 9 hours until after the animals were loaded, thus extending the scheduled transport time. The problem of compatibility of transport times of animals and rest times of drivers would be easily solved by a maximum transport time of 8 hours for live animals.

Green solutions for everyone

These kinds of live animal transports are a result of our perverse globalized agricultural system and harm not only the animals, but also us humans and the environment. Together with my colleagues in the Green Group I fight for:

Instead of shipping animals halfway around the world, we need to focus on local production. A simple and sensible solution would be an origin labeling also in the gastronomy, so that consumers can make conscious decisions and these cruel transports can be stopped.